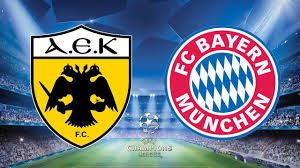 The Champions League is back and we are ready for some more action in Europe’s finest competition. We are taking our attention to Athens – the beautiful capital of Greece, where AEK hosts Bayern Munich in a match from Group E of the tournament.

AEK are in a complicated situation since the start of the group stage. The Greek team is currently 4th in the group with no points won so far. AEK started their campaign with a 0-3 loss against Ajax in Amsterdam, which was followed by a brave display against Benfica, but a 2-3 loss at home.

Despite of losing against Benfica, the Greek team showed that it have some qualities to show. AEK scored two goals against the Portuguese team, but they were still not enough for at least a point. Now they will make another try against one of the favourites for the trophy – Bayern Munich.

Bayern Munich are having some problems since they appointed Niko Kovac as a manager. The Croatian tactician is having a rocky start of his career at the Allianz Arena. Bayern are struggling in the Bundesliga and they are currently second in their Champions League group.

The German team started its Champions League campaign with a win over Benfica in Lisboa, but in the previous round they only made a 1-1 draw at home against Ajax. Mats Hummels opened the score for the Bavarians, but soon after this Ajax equalized. It was another unsuccessful day for Kovac’ Bayern.

Bayern Munich are hurt right now, but it doesn’t mean that they are not a world class team anymore. We expect to see the Germans very motivated against AEK in Athens. During the week Bayern made a good game and won in the Bundesliga, so maybe they are once again finding their rhythm.