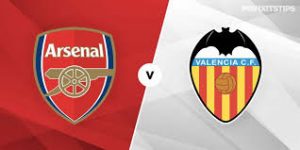 Arsenal hosts Valencia at the Emirates Stadium in a first 1/2-finals leg from Europa League. One of these two teams will reach the big final at the end of May. Let’s take a look.

During the 1/4-finals Arsenal had a tough task, having to face Napoli. Most of the football fans expected a very competitive tie between these two sides, but the truth is that Arsenal dominated both games and won them. After a win in the first match with 2-0 at home, at the Stadio San Paolo the Gunners achieved another win and reached the 1/2-finals of the competition.

Given the fact that Arsenal lost four of their last five games in the Premier League, they could be left outside the Top 4 at the end of the season. This means that winning Europa League could be the club’s only ticket towards a return to the Champions League for the next season.

How we said, the Gunners are not doing well in the Premier League recently. They are in a run of three consecutive losses in the league, which really put a lot of pressure on Unai Emery’s shoulders. If he fails to qualify the team for the Champions League, he’d have to answer to a lot of criticism.

Meanwhile Valencia reached the 1/2-finals of Europa League after two wins over another Spanish side – Villarreal. Marcelino’s team scored five goals in the two legs against the Yellow Submarine, proving to be superior during the 180 minutes.

In the Spanish La Liga Valencia are also not in their best situation at the moment, losing their two last games in the league against Atletico Madrid and Eibar.

We have all the reasons to expect a pretty great clash between Arsenal and Valencia at the Emirates on Thursday night. Let’s see what’s going to happen!