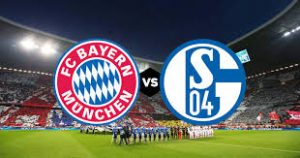 The champion Bayern Munich welcomes Schalke 04 in a match from the 21th round of the German Bundesliga. Let’s take a look at this clash at the beautiful Allianz Arena.

For Bayern this season is difficult. Right now the Bavarians are third in the league with 42 points, trailing on 7 points behind the leader Borussia Dortmund. They are behing Borussia M’gladbach in the standings as well. Surely this was not Bayern’s fans were expecting from Niko Kovac’ first season as a manager. The champions have a lot of troubles.

Right now Bayern’s record in the league shows 13 wins, 3 draws and 4 losses. In their last five games the Bavarians won four times, but in the last round they suffered a 1-3 loss during the visit to Bayer Leverkusen. Leon Goretzka opened the score for Bayern at the BayArena, but in the second half they conceded three goals. If Bayern finish the season in the Bundesliga in such position, maybe Niko Kovac won’t lead the team next season.

Schalke 04 are also suffering from a bad season. Last year the Royal Blues finished second in the league, qualifying for the Champions League. But now Schalke are 12th in the league with 22 points, which is really dissapointing. Their record in the league so far shows 6 wins, 4 draws and 10 defeats. In their last five games the Royal Blues won twice, made one draw and lost twice.

Schalke’s last game ended with a loss. Domenico Tedesco’s boys lost with 0-2 their home game against Borussia M’gladbach. Both goals were scored in the last five minutes, when Christoph Kramer and Florian Neuhaus scored for the visitors.

Bayern Munich do not have any other choice, but to look for the win against Schalke. But can they do it?