Borussia Dortmund hosts Schalke 04 in the great Ruhr derby of the German Bundesliga. These two local rivals will meet at the Signal Iduna Park on Saturday afternoon. Let’s take a look.

The current situation of these two teams right now is completely different – Borussia Dortmund are fighting for the title, while Schalke 04 are dangerously close to the zone of the relegation playoff. We can say that this match is important for both sides, although for different reasons.

How we said, Dortmund are still in the title race. They are 2nd in the standings with 69 points, being just one point behind the leader and reigning champion Bayern Munich. A win against Schalke will allow Borussia to occupy the top again, before Bayern’s game against Nurnberg.

So far in the league Borussia Dortmund won 21 of their matches, made 6 draws and suffered only 3 losses. In their last five games in the league Lucien Favre’s boys are almost perfect – four wins and only one loss, suffered against Bayern at the Allainz Arena. In their last game Dortmund visited Freiburg and enjoyed a fantastic 4-0 win. Jadon Sancho, Marco Reus, Mario Gotze and Paco Alcacer scored for the visitors. 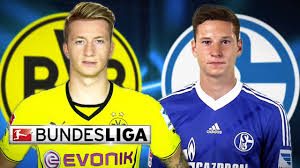 In the same time Schalke 04 are 15th in the Bundesliga with 27 points, being only 6 points ahead of the 16th Stuttgart. This season has been terrible for the Royal Blues, who lost 17 of their games so far. In their last three matches Schalke won only one point – in the draw against Nurnberg. In their last fixture Huub Stevens’ boys suffered a heavy 2-5 loss during the home game against Hoffenheim. Daniel Caliguiri and Guido Burgstaller scored for Schalke on this day.

We have a clear favourite in this derby between Borussia Dortmund and Schalke 04, but do not forger – sometimes there ain’t no favourite in a derby match.