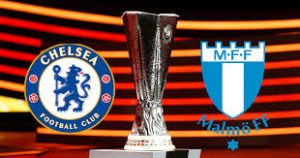 Chelsea hosts Malmo FF in a second leg from the 1/16-finals of Europa League. Let’s examine this clash at the Stamford Bridge in London.

Far from surprising, Chelsea have an advantage after the first leg on Swedish soil. In Malmo the Blues enjoyed a 2-1 win, thanks to goals from Ross Barkley and Olivier Giroud. Anders Christiansen scored back one for Malmo, but this didn’t prevent the loss for the Scandinavians. Now Malmo have a very complicated task at the Stamford Bridge, while Chelsea are the clear favourite for progression.

Chelsea are a team with a lot of problems at the moment. The team already lost the fight for the title in the Premier League, also being kicked out from the FA Cup after a defeat against Manchester United on Monday. According to the rumors, the team’s manager Maurizio Sarri is pretty close to being sacked by the club’s board. Many of the fans do not want to see Sarri continuing doing the job at the Stamford Bridge.

Right now Chelsea are 6th in the Premier League standings. Winning Europa League could be the club’s ticket to the Champions League for next season, so that’s why Chelsea will try to win this competition.

Meanwhile the season in the Swedish Allsvenskan is still about to begin. Last season Malmo FF finished third in the league, but now they will try to do better and win the title again. This lack of match practice in official games is not helping Malmo, though.

That’s what we had to say about the Europa League game between Chelsea and Malmo FF on Thursday night. We believe that Chelsea are not going to make a mistake here, although they have a lot of problems at the moment. They are just a much better team than Malmo.