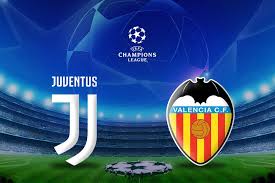 The leader in Group H of the Champions League Juventus welcomes Valencia in a match from the 5th round of the competition’s group phase. Let’s take a look at this clash at the Allianz Stadium in Turin.

Juventus are leading the group with 9 points, having 2 points advantage in front of the 2nd Manchester United. Despite of their home loss against United (1-2) in the previous round, the Old Lady remains a strong favourite for the first place. All they must do is win their remaining two matches against Valencia and Young Boys. Then they will finish first, no matter what Manchester United do in their remaining two games.

Like we said, in their last game in the Champions League Juventus suffered a dissapointing loss against Manchester United at home. The English team scored two late goals, which allowed them to win surprisingly. Before this, Cristiano Ronaldo scored against his former club.

Juventus have not won the Champions League since 1996, so this is their big goal at the moment. In the last 3 years they played two finals, but lost them. Now – reinforcing their team with a player like Ronaldo, they are a big favourite to win the trophy. There’s no doubt about this.

Valencia on the other hand are 2 points behind Manchester United, being 3rd in the group. This means that Los Che still have some chance to aim for the 2nd place, but they need a positive result in Turin. And this is going to be very difficult to achieve.

In their previous game in the competition Valencia achieved their first win in the group, beating Young Boys with 3-1 at the Mestalla.

These are our thoughts about the Champions League clash between Juventus and Valencia at the Allianz Stadium in Turin. Good luck!