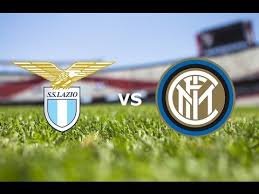 Lazio welcomes Inter in a match from the last 38th round of the Italian Serie A. The game is going to be played on Sunday night at the Stadio Olimpico in Rome.

Lazio are 4th in the Serie A standings with 3 points advantage in front of the 5th Inter. And much better goal difference. These two teams were engaged in a tough fight for a Top 4 finish, but in the last few rounds it was Lazio who performed better and took a precious advantage.

Right now Simone Inzaghi’s team have a record of 21 wins, 9 draws and 7 losses. In their last five games the Romans won three times and made two consecutive draws against Atalanta and Crotone. Lazio have some luck and these draws won’t be fatal for their Top 4 ambitions, because in the same time Inter made some mistakes as well.

Inter are 5th with 69 points and a record of 19 wins, 12 draws and 6 defeats. We can say that the Nerrazuri failed to show their best qualities in these last few decisive rounds of the season. In their last five games Luciano Spalletti’s boys won three times, but also suffered two defeats against Juventus and Sassuolo. And if it’s normal to lose against the champion, the loss against Sassuolo was a clear sign that Inter are still not ready to finish in the Top 4 and to return to the Champions League.

This is our look on the Serie A game between Lazio and Inter. We can say that the Romans won the fight for a Top 4 finish and now they will try to finish their season on a high note. Lazio are going to return to the Champions League and this is a big moment for them. Inter will try once again next season.