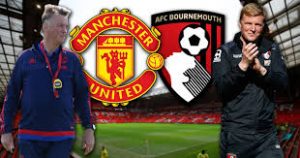 Manchester United hosts AFC Bournemouth in a game from the 20th round of the Premier League. Let’s take a look at this game at the Old Trafford Stadium in Manchester.

Manchester United are playing really well since the team is managed by the club legend Ole Gunnar Solskjaer. The Norwegian tactician replaced the sacked Jose Mourinho. Since this managerial change, United enjoyed two consecutive wins – against Cardiff City and Huddersfield Town. In these two games the team also scored 8 goals, which is impressive.

In their previous fixture the Red Devils managed to achieve a 3-1 home at win against Huddersfield Town. Nemanja Matic opened the score for United, while Paul Pogba scored a brace for the home side. The French international is clearly playing much better since the sacking of Mourinho. We know that their relationship was not healthy at all.

Right now United are 8 points behind the 4th Chelsea and the Top 4. Of course, the team’s goal is clearly qualifying for the Champions League. But in order to do this, Manchester United have to be near perfect until the end of the season.

Bournemouth are 12th in the Premier League standings with 26 points won so far and a record of 8 wins, 2 draws and 9 defeats. Eddie Howe’s boys won two of their last five games, but also suffered three losses, including against Tottenham in the previous round.

For Bournemouth it was a tough visit to the Wembley Stadium. Tottenham won this game with 5-0, dominating their opponent from the first to the last minute. Five different players scored in Amir Begovic’ net. Obviously for Bornemouth it was not a good day to play football.

Manchester United are the obvious favourite to win against Bournemouth. The Red Devils are once again motivated to win since Jose Mourinho was sacked. It’s a good moment for them.