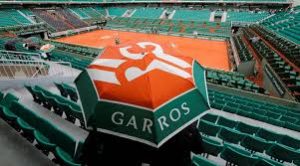 The number one seeded Simona Halep (Romania) will face the American Sloane Stephens in the big final of Roland Garros 2018. For Halep this is third Roland Garros final, but she’s still about to win hir maiden title from the Grand Slam.

Meanwhile Sloane Stephens will play for a second time at a Grand Slam final in his career. In 2017 the 25-years old Stephens played for the title at US Open and won the tournament. Now she has the chance to win her second Grand Slam title.

Number one in the main draw, Simona Halep started the tournament with a lost set, but a 2-6 6-1 6-1 win over the American Alison Riske. In the second round the Romanian faced another American – Taylor Townsend, but this time she didn’t lose a set – 6-3 6-1.

In the third round Halep beat the German Andrea Petkovic, also doing in two sets – 7-5 6-0.

In the 4th round Simona Halep once again merciless, giving just three games to Elise Mertens from Belgium – 6-2 6-1.

In the 1/4-finals Halep had a tough test against the №12 seeded Angelique Kerber from Germany. Kerber fought hard in the first set and won it, but it was another win for the Romanian – 6-7 6-3 6-2.

To reach the final in Paris, Simona Halep prevailed over Garbine Muguruza in the 1/2-finals – 6-1 6-4.

Sloane Stephens on the other hand also started her participation in Paris with a bang – she beat Arantxa Rus from the Netherlands with 6-2 6-0 in the first round. In the second round the American faced Magdalena Frech from Poland and also did in two – 6-2 6-2.

In the third round Stephens lost a set against the Italian Camila Giorgi, but still took the win – 4-6 6-1 8-6.

In the 4th round Stephens didn’t let any chances to the Estonian Anett Kontaveit – 6-2 6-0, while in the 1/4-finals she enjoyed another win in two against the Russian Daria Kasatkina – 6-3 6-1.

To reach the final against Simona Halep, Sloane Stephens beat her countrywoman Madison Keys at the 1/2-finals – 6-4 6-4.