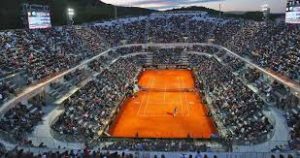 The number one in the seed Simona Halep faces the number four Elena Svitolina in the big final of the strong WTA tournament in Rome.

Simona Halep proved why she’s number one in the draw, cruising through everyone else to reach the final. The Romanian rested in the first round and in the second round she faced Naomi Osaka from Japan. Halep showed her true strenghts and left Osaka without a chance, beating her in a spectacular fashion – 6-1 6-0. We can say that this was Halep in her best light – strong and dominant on the court.

In the next round Simona Halep had to face the American Madison Keys. This match didn’t go through, because Keys had to withdraw from the match because of an injury.

Halep didn’t give any chance to Caroline Garcia as well, beating her 6-2 6-3, before it came to another classic showdown against Maria Sharapova in the 1/2-finals. This time Halep won, beating the former world number one with 4-6 6-1 6-4.

In the final Halep is about to face the Ukrainian Elena Svitolina.

Svitolina also had a rest in the first round, before beating Petra Martic in the second – 6-1 6-2. This win was followed by a win over the Russian Daria Kasatkina – 0-6 6-3 6-2. It was a terrible first set for Svitolina, but in the next two she showed her true strenght.